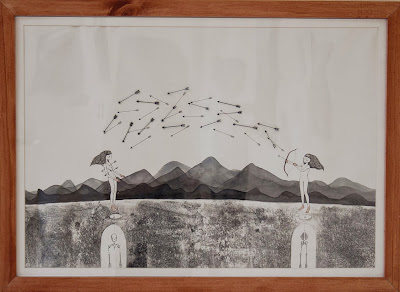 I have been experimenting with glass a little, and I really love how it creates another dimension for illustrations that might otherwise look a little flat. In the detail below you can kind of see how I've draw some of the arrows on top of the glass to get a more layered effect.
This is just a sneak peak of this image, but I will upload the finished print and story soon-soon :) 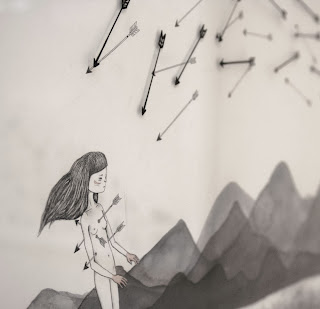 Posted by Wonder Meyer at 6:55 pm No comments:

Email ThisBlogThis!Share to TwitterShare to FacebookShare to Pinterest
Labels: illustrations

As Above, So Below 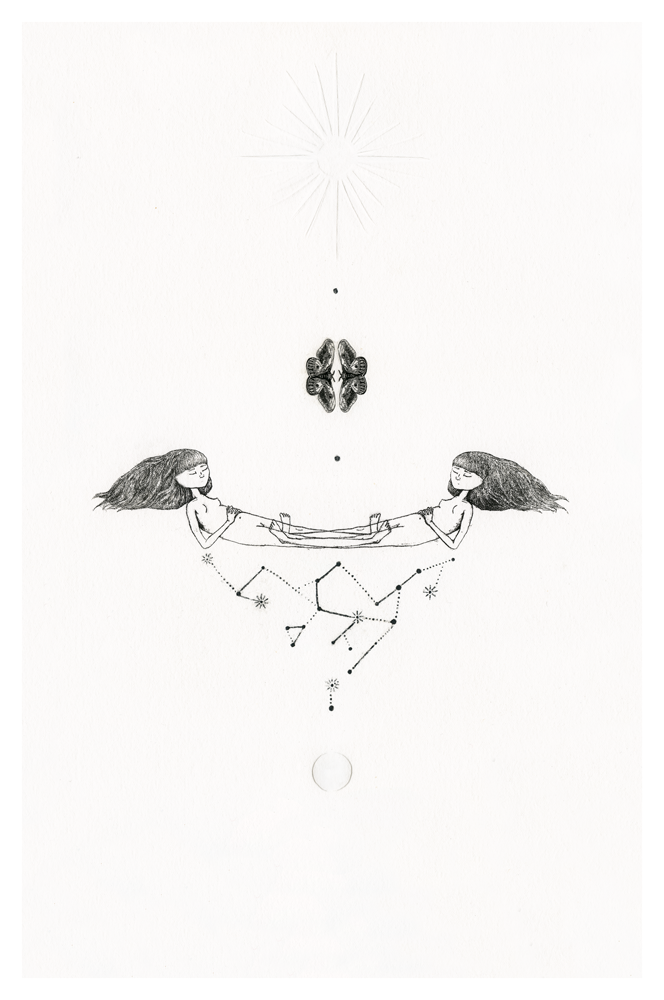 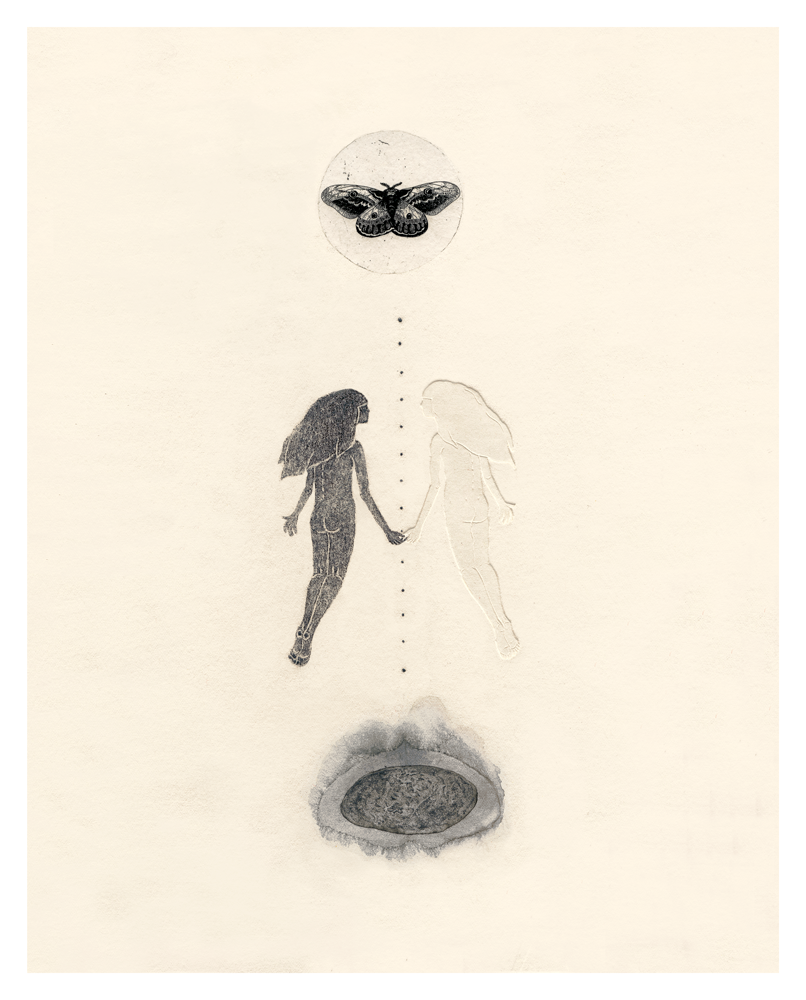 Oh, hello! Time to tell you a bit about Constellation and Moonmoth.
Let's get conceptual up in here! Okay, that was lame, I am not going to write this post like a Brooklyn-based rapper from the 90's, because thats no fun for anyone. except me. Because then I could shamelessly use terms like 'what the hizzle' and...no, Wonder, no! This blog is no place for such nonsense. Let us proceed in a dignified manner.

Symbolism of opposition, or themes of binary opposites, are methods used by humankind to attempt to define abstract concepts such as life and death, positive and negative, love and hatred etc. These abstract concepts are compared and contrasted against each other so that they can be better understood, and have been the inspiration for many myths, as well as serving as the inspiration for my illustrations. As seen with myths and folktales, visual metaphor in the form of symbolism is also incorporated into the imagery above, thereby constructing a 'visual myth'.

Giving these dichotomies of our existence material form is a conceptual strategy I persue in many of my illustrations. Both Moonmoth and it's sister illustration, Constellation, explore the ineffable concepts of death and the afterlife by contrasting dualities of life and death, night and day, and Animus and Anima, as myths are said to do.  Animal symbolism is used in both images to portray a psychopomp (hee!), which in Greek mythology refers to a guide for souls on their journey to the place for the dead. According to many traditions, animal psychopomps frequently occur as a winged creature such as a bird or butterfly, hence the incorporation of moths in these pictures. As you may know by now, I am a great lover of critters, but generally tend to steer clear of insects. I am, however, quite fascinated by moths. I love that they are nocturnal creatures, only coming out at night, yet so drawn to light. And their  inherently self-destructive nature. They seem so contradictory, mysterious and lovely, and I'm quite sure that they will continue cropping up in my work.

The originals are hand drawn on Fabriano, and I've embossed the sun and moon in Constellation, as well as the figure on the right in Moonmoth. I've used a technique known as chine colle for the moths, and there was also a little watercolour used in Moonmoth to represent the dark moth-shaped shadow at the bottom of the image. Both illustrations translate beautifully into giclee prints and are available for purchase.

Posted by Wonder Meyer at 6:07 pm No comments: 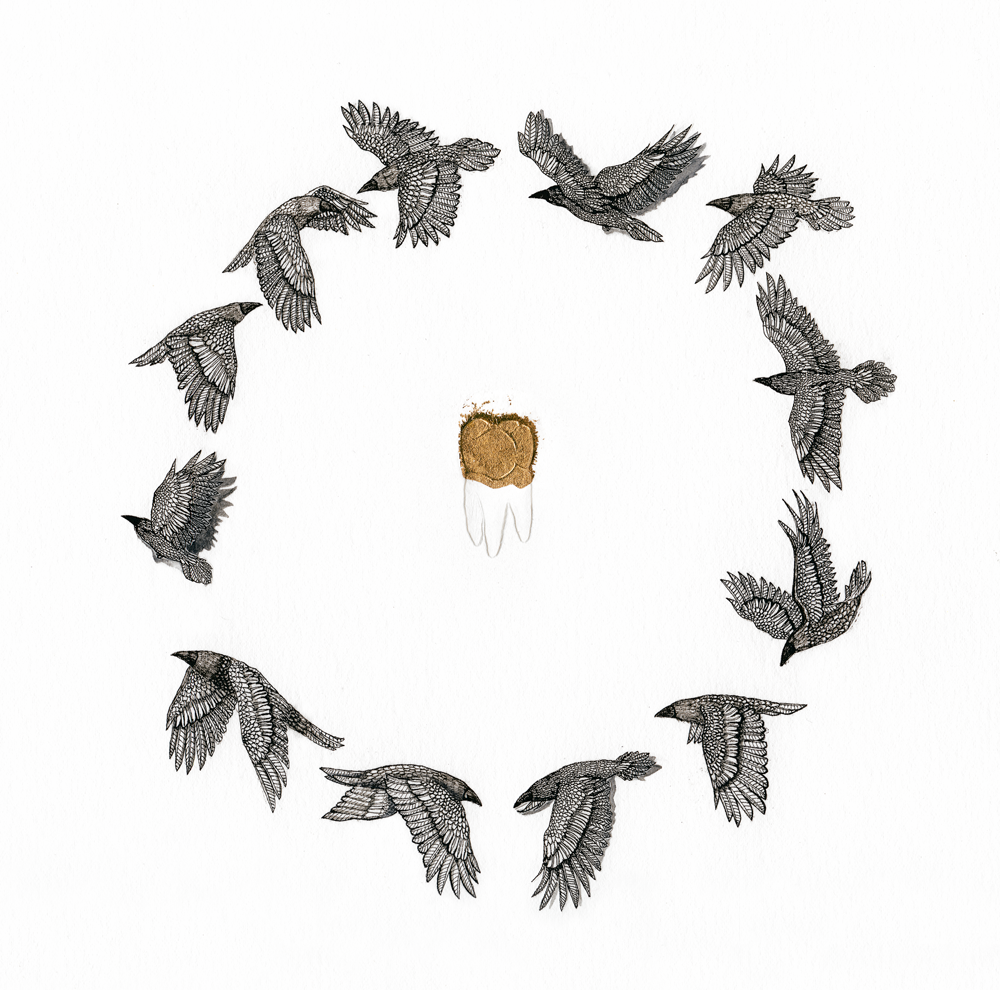 I played around with gold leaf for the first time with this illustration. It is so finicky, but I finally got the hang of it and used it to top off an embossed tooth.

Posted by Wonder Meyer at 6:04 pm No comments: 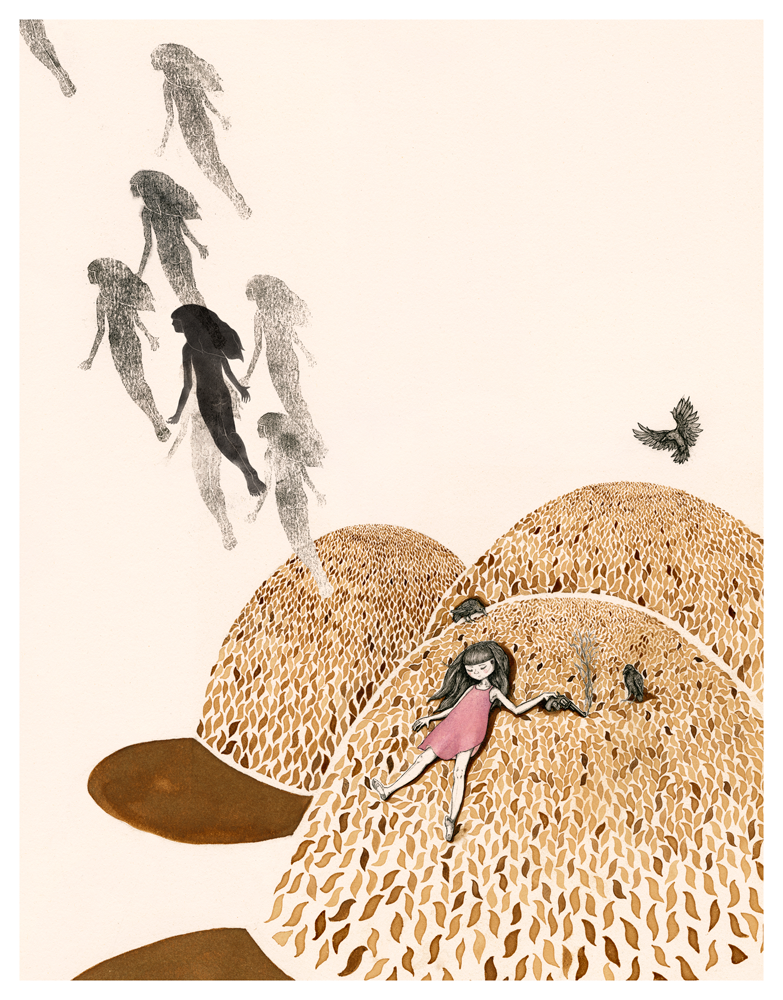 
Despite the seemingly macabre subject, this was actually just meant to be a humorous look at how many souls a schizophrenic/ multiple personality person might have. It was inspired by Flora Rheta Schreiber's 1973 book entitled Sybil, which documents the first psychoanalysis of a multiple personality. The darkest 'soul' on the illustration floats above the rest as she is actually fired onto a sheet of glass which sits on top of the picture. The drawing is done in pen and watercolour, and I used instant coffee to paint these hills- the only thing instant coffee is good for in my books..

Not that you're asking, but yes, I've experimented a lot with methods of overlay, superimposition and transparency to add  depth and subtle texture to this series of artworks, which would otherwise appear a bit too flat and straightforward to express such ephemeral themes.. i think. I've found that the semi-opaque texture created by oxide painting on a sheet of glass translates well in the depiction of souls and apparitions and reflects the element of intangibility and the spirit world. Now you know.

A last note on this contradictory piece, bare with me here, because I must reiterate.. Children’s literature, folklores and fairytales are a great source of inspiration. Its not so much the stories that influence my work, but how something can appear sweet and childlike, but   there are subtle (and sometimes not so subtle) underlying themes that are seriously inappropriate. Think of the witch that tries to roast Hansel and Gretel in her oven, Snow White who gets poisoned by her own step-mom, Red Riding Hood's beloved grandmother that gets devoured by a wolf, which she then disembowels, sews up with rock and drowns.  Its pretty horrific subject matter, yet they are such well loved childrens stories. In these visual narratives, the main character is often rendered in a way that may seem saccharine, but there is always (hopefully) a bit more to the story than just a pretty picture.

Posted by Wonder Meyer at 5:53 pm No comments:

Of Atrophies and Reveries 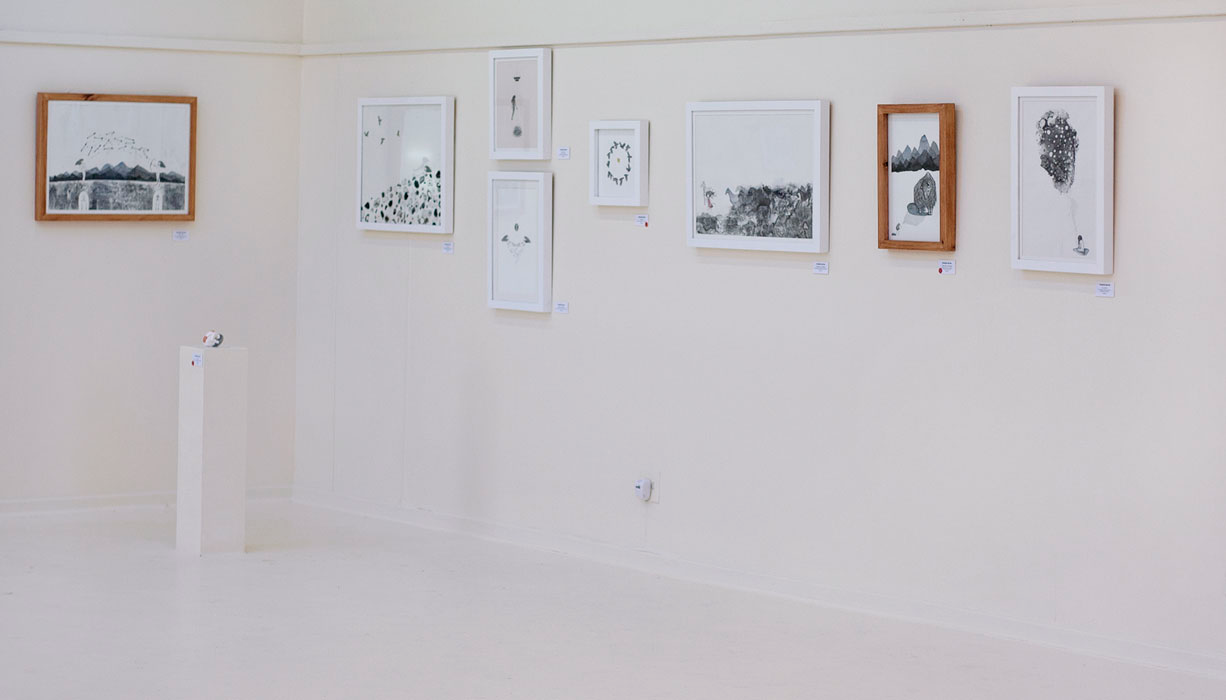 Above is a snap from the exhibition of my most recent body of illustrations, Of Atrophies and Reveries.

I have learned that, as an artist, I am expected to give insightful explainations regarding the 'meaning' of my work to whomever is kind enough to take an interest in it. I have written about my preferred method of interpretation of my work before, and lets be real for a second here. I am truly horrible at providing articulate answers on the spot. Really truly. The pressure! I usually think I'm doing okay until I glance over at the person I'm directing my incomprehensible waffle at and they are looking back at me with skeptically arched brows and a healthy dose of 'what the hell are you on about?' blazing out their eyes. I'll keep working on it, I promise. But in the meantime if you all read this nicely prepared little artsy speech then I dont have to answer any stressful questions on the spot, right? Right!
Here we go then:

A great part of what we perceive is intangible and cannot be successfully expressed in a purely verbal manner, and because of this, many of our experiences are rendered indescribable. However, the substitution of verbal description for visual metaphor and allusion can communicate things that can scarcely be put into words, and I employ these techniques in my illustrations in order to give visual form to the ineffable.

By attempting to explicate the ambiguities and contradictions of human existence, visual metaphors appear to serve the same function as mythology and folklore. Myth has allowed people to make sense of the world around them by contrasting fundamental opposites, for example; night and day, love and hate, good and evil. The body of work Of Atrophies and Reveries is inspired by the notion that these dualities permeate almost all levels of existence. Symbols inherent to fables and myths as well as those of a personal nature are appropriated to illustrate an introspective journey. These illustrations endeavour to give form to the transient emotions and personal experiences in the form of idiosyncratic visual myths.

Posted by Wonder Meyer at 5:49 pm No comments: 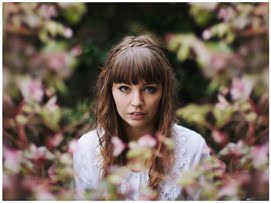 illustrator + adventurer
Welcome to my blog Bow & Arrow.
My name is Wonder Meyer and I'm a freelance illustrator from South Africa. All illustrations seen here are available as high quality prints on acid free, archival paper.
If you'd like to contact me about purchasing my work,
or just want to say hello, please drop me an email at
meyer.wonder@gmail.com
Please credit if you decide to share xo